How the “Ban Bossy” Conversation is Getting Derailed 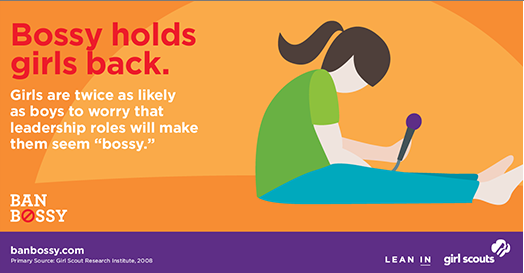 Last week, Sheryl Sandberg (COO of Facebook, of “lean in” fame), former Secretary of State Condoleeza Rice, and Girl Scouts USA CEO Anna Maria Chávez teamed up to launch the “Ban Bossy” campaign. In a nutshell, this campaign introduces the general public to the idea of “bossy” as a highly-gendered word:

“When a little boy asserts himself, he’s called a “leader.” Yet when a little girl does the same, she risks being branded “bossy.” Words like bossy send a message: don’t raise your hand or speak up. By middle school, girls are less interested in leading than boys—a trend that continues into adulthood. Together we can encourage girls to lead.”

The campaign also links “bossy” to the other “b” word often aimed at women in leadership positions, which is an important connection for people to think about (remember this recent Pantene commercial that got a lot of attention for addressing workplace stereotypes?). There is certainly an important place for conversations about degrading gendered language, but this is not the central focus of the Ban Bossy campaign, which states that its mission is to “encourage girls to lead.” Do you see the disconnect between the slogan and the mission? Because the Ban Bossy campaign specifically focuses on a word, it imposes distinct limitations on public discussion of the idea that the Ban Bossy campaign is trying to address: the leadership gap.

The choice of a word over an idea means the overall mission is getting derailed in a million ways: from people wondering whether “bossy” is actually “a useful descriptive word” to focusing on whether “bossy” should be reclaimed rather than banned (side note: hmm, are we really going there again?) to exploring the idea that not all good leaders are bossy. Don’t get me wrong – the money and celebrity power behind this campaign are certainly succeeding in drawing attention to the leadership gap in a big way. The problem is that most of the discussion around it is bounded by the distracting parameters of the word “bossy”, rather than focusing on the forces sustaining the leadership gap. The message is getting derailed because the Ban Bossy campaign breaks Rule #1 of framing: you cannot reframe by negating the existing frame. If I tell you not to think of an elephant, suddenly that’s all you can think about. It’s just how our minds work. The word “bossy” is a powerful, loaded word and it activates a certain set of ideas in our brains. That’s why 99% of the conversation around the Ban Bossy campaign is about the specific word “bossy” … NOT about the powerful cultural forces keeping girls and women from exercising their legitimate power to lead.

This recent New Yorker article on the Ban Bossy campaign is a perfect example of a journalist falling right into this trap:

“… ‘bossy’ is a useful descriptive word that invokes a particular kind of behavior. It’s not actually a synonym, derogatory or otherwise, for leadership or authoritativeness, nor necessarily a criticism of women who embody those qualities. What it usually connotes is someone who is not in fact your boss, or a boss at all, telling you what to do. It’s the kid in your social-studies class informing you that you’re doing the assignment all wrong, or the person on the bus dispensing unsolicited advice on child rearing. Bossiness is a common human foible—though it could also be true that women with authoritative ambitions who have been denied chances for actual authority may historically have resorted to it more. In my experience, the word ‘bossiness’ is a solid little stand-in for officiousness.”

Whoa, whoa, whoa. What’s missing from this paragraph? Here’s what: it completely ignores the fact that girls are being told that they are “bossy” in situations when they are actually fulfilling a leadership role and/or exercising legitimate power to speak their minds. Why would someone choose to use a “useful descriptive word” so inappropriately? Clearly, it’s to keep girls in their place. It’s called “gaslighting” and it’s not a new concept. Convincing a girl that she is being too “aggressive” or “pushy” when she is not is an extremely powerful manipulation technique. Gaslighting is meant to make a person question their “memory, perception, or sanity” and in the case of “bossy”, this gaslighting is specifically meant to make a girl question her legitimacy as an opinion-holder and leader. Adding a “-y” to the end to “boss” trivializes the word, so a “boss-y” person is a person with no legitimate power. Now, let’s stop for a minute and think about what we would call a girl who is exercising illegitimate power over other children in inappropriate ways. Do we have a word for that? Yes, we do: bullying. If so-called “bossy” girls are not bullying, then what is the problem here? It’s actually pretty serious: they are disrupting the social order.

The word “bossy” derives much of its power from another highly-destructive, gendered word: “nice.” The two of those words together set up a framework with significant power to keep girls “in their place.” By definition, a “bossy” girl is not a “nice” girl. A “nice” girl is generally considered to be pleasant, agreeable, and cooperative. She waits for permission and does not make waves by assuming power or challenging others’ assumptions or ideas. Where is the space between “bossy” and “nice”? It’s like the virgin/whore dichotomy. Unless we want to stay stuck in this no-win space, we have to step outside of the “bossy” v. “nice” frame and choose new words that do not reinforce old patriarchal ideas. If we set ourselves up to discuss the word “bossy”, then that’s what we’ll discuss. Yes, the Ban Bossy campaign has gotten people thinking about the word in a new way, and that’s amazing. But instead of taking away the word’s power, this campaign is inadvertently shoring it up.

3 thoughts on “How the “Ban Bossy” Conversation is Getting Derailed”