My last post was about the Vancouver YWCA’s annual violence-prevention campaigns. Their 2013 campaign was about media literacy and the sexualization of women and girls, but the year before, they took a different approach that I wanted to highlight separately.

Here is an image from last year’s campaign: 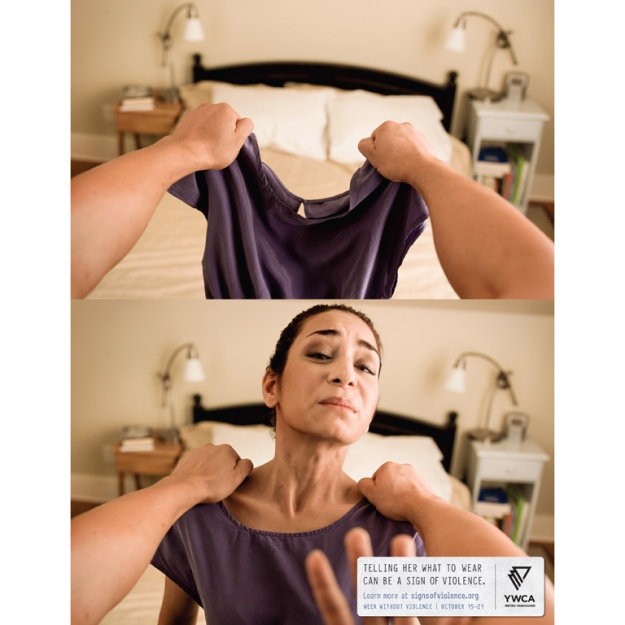 I had a strong reaction to this campaign. It aims to prevent violence by showing potential bystanders that often-minimized controlling behaviors (telling someone what to wear, harassing text messages, destroying personal things, etc) can be signs of violence. The images in the ads make an immediate connection between these controlling behaviors and life-threatening physical violence, like this one juxtaposing harassing texts with strangulation: 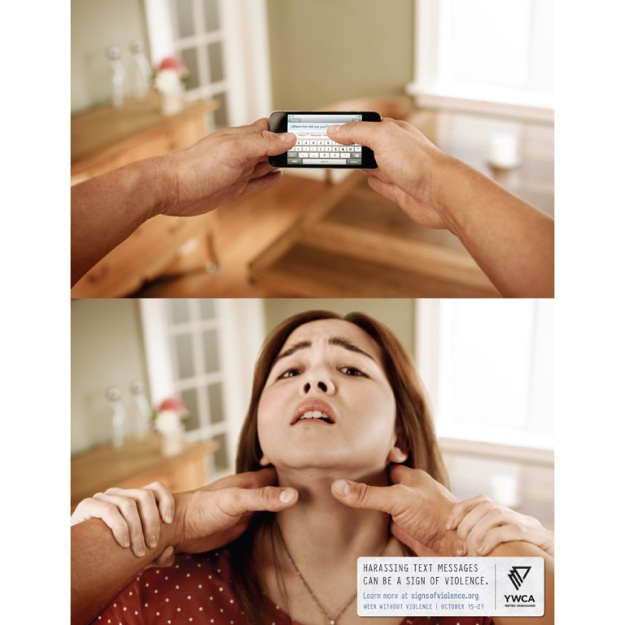 My initial reaction to the above ad was “aren’t harassing text messages violent enough in themselves?” and then I started thinking about how easy it can be to rationalize away controlling behaviors, especially if they aren’t leading to dramatic physical violence. Do these ads backfire a little bit in that their extreme nature could make this rationalization easier (“it’s not that big of a deal, he’s just particular/jealous/has a temper but he’s never laid a hand on me”)? However, the ads are not aimed at people experiencing controlling behaviors – they are aimed at family/friends/coworkers, who may be much less likely to make excuses for the behavior. Do we need something this shocking to grab our attention and encourage us, as bystanders, to take a closer look?

The harshness of the messages felt overwhelming to me, and the intense radio ads (one of which is text message sounds that transform into life support beeping, that then flatlines) remind me a little of “Don’t have sex. Because you will get pregnant. And die” scare-tactic lesson in Mean Girls. I would love to know more about how the general public reacted to hearing them. I found myself wishing the ads had built on the intense attention-grabbing by giving a concrete action for what a friend/family member can do, besides go to the YWCA’s website for more information. According to the outcome data, the website did see a significant increase in traffic (which is fantastic because it means people are getting help), but my mind always goes to the people who see/hear the ads and will never visit the website. What if just a little bit more education could be snuck in there somehow? I don’t have any brilliant idea for how specifically that could be done for this campaign, but it’s something worth exploring. For the HollabackPHILLY Spring 2014 ad campaign, we want to incorporate a bystander intervention focus that goes beyond “do something!” to “what if you did this specific thing?” to start modeling some possible responses. It’s really tough, though! There are lightyears of distance between sitting around saying “why don’t you do x, y, z” and actually trying to figure out whether an approach actually would help your mission, and if so how to go about implementing it. I give props to the Vancouver YWCA for all of the time, energy, and thought they put into their annual campaigns, and can’t wait to see what they do in 2014!