This great new PSA from the University of South Florida takes the unusual route of using the language of dance to show the warning signs of dating violence.

The person behind this unique effort is Andrew Carroll, Assistant Professor in the department of Dance and Theater at the University of South Florida. Before entering academia, he spent nine years as a soloist with the Pennsylvania Ballet Company in Philadelphia, and now he’s pioneering an effort to create educational videos on social justice topics. The nonverbal nature of his work makes it easily adaptable both nationally and internationally. This dating violence video is already being used by the Los Angeles School District, where 200 different languages are spoken, and internationally (Germany, Greece, Czech Republic, Northern Ireland, Kosovo, Belgium, and Belarus, among other countries). The CDC in Atlanta is also interested in using it their domestic violence programs.

Prior to this, Professor Carroll created a similar video on bullying in 2012. The bullying video was also quickly adopted by US and international organizations.

The concept of using dance to communicate and educate about a social justice issue is a great idea, because watching movement activates mirror neurons. Mirror neurons are the brain cells that cause us to actually feel the feelings we see in others’ faces and the actions we see in others’ bodies (see my previous post for more info on how they work), and this generates empathy. Dance is not just ordinary movement, though; it is art. A dance performance like the one in this video is movement specifically designed to deliver powerful, amplified doses of emotion. Since evoking emotions is the number one most critical thing to make any message memorable and effective, using movement-based art to communicate makes a lot of sense.

I should clarify that I’m using the term “PSA” loosely with this video. It’s not an advertisement, but rather an educational tool. It’s much longer than a typical ad, and because it’s meant to be used as part of an educational program, it doesn’t have to have to be concise with its message. It can instead focus on evoking emotion and preparing viewers to delve deeper into the topic through discussion. However, I think this video’s potential for virality (it’s already making its way around the world) sends it into the public arena in a way that’s very similar to a PSA campaign.

Part of the reason the video is getting so much attention is the uniqueness of its nonverbal message. The only words that appear, right at the beginning, are: “Speaking Without Words: Dating Violence. Recognizing warning signs.” The rest is all dance. People have to use words to talk about this video, though, and it’s interesting to look at the choices they make. I first found out about it through this article by 10 News in Tampa, Florida, and the the thing that immediately struck me was that the entire article refers to “domestic violence”, not “dating violence,” even though the video itself specifically refers to “dating violence.” So are these two terms interchangeable? Not exactly.

“Dating violence” is a relatively new term, and is most often used in efforts specific to teens and college students.

“Domestic violence” is an older term, and it has a lot of strong associations. It tends to conjure up the image of an older, married, heterosexual woman being controlled and physically abused by an aggressive, violent man, like Julia Roberts in Sleeping With the Enemy: 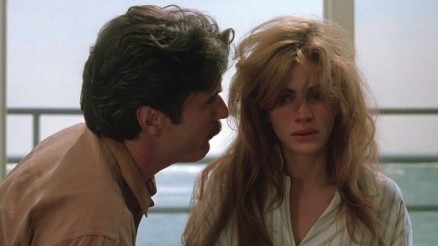 “Dating violence” on the other hand, is relatively free from such associations and aims to expand the images we see when we think about violence in relationships. The CDC defines dating violence as “as the physical, sexual, or psychological/emotional violence within a dating relationship“. So the main difference is that we’re not talking about married people/people in a committed relationship here. People of all ages can experience dating violence, but usually the specific focus is on younger people navigating the dating world.

Here is an example of the kind of thing the term “dating violence” encompasses:

Looking again at the dance PSA video, it makes sense that a local news channel would choose to use the term “domestic violence”, since that is the term its target audience – the general public – is going to most quickly and immediately recognize. “Domestic violence” is guaranteed to grab people’s attention and draw them in, in a way that “dating violence” might not. However since the target audience of the video itself is much more specific to young adults, it makes sense that it uses the term “dating violence” instead.

As a final note on terminology: if you think about it, abuse within a relationship is still abuse whether the people in the relationship are 13 or 75, dating or married. This is why people in the violence prevention field usually say “intimate partner violence” as an umbrella term. Unfortunately, “intimate partner violence” completely fails at evoking emotion, making it a hard sell for any kind of advertising effort. Law enforcement and the general public stick with “domestic violence”, and this is definitely the term that resonates strongest with most people (though clearly, the image resonating with them may not be the image a specific effort is trying to convey). Another thing to consider is that “domestic violence” can also include violence among family members that do not have an intimate relationship. This is often referred to as “family violence.” Since the end goal of a PSA campaign is communication, not perfect academic correctness, the best choice is always going to be the one that gets your target audience both paying attention and connecting with your message.